BIRDIE Channel Michel TEICHET. In 2016, Michel TEICHET embarked on a challenge that he is facing: to create a Golf channel different from what is done or at least from what was made.
In the closet the advice of the single voice of a single pro, the radius of the unsold the ancestral precepts of the head that must remain on the ball and the rank of the nerds: the speeches flat, dull and insipid.

The former consultant of Canal +, in the image of his certificate of Airplane pilot, takes the height for our greatest happiness.

Michel TEICHET showcases golf. Golf is the culmination of his message. To communicate, to bring, to help, to exchange, to make known the places, the actors, the techniques, the mind and thus to deliver a finished product at each end clap of his videos.

His videos are accompanied by what made him dream and that he accomplished: moving in the air, as we pointed out, he has the pilot’s patent which gives him the right to pilot a drone.

The shots are loaded with beautiful plans that make us discover fantastic landscapes.
The 4k images taken either from his airplane, or his drone, of extraordinary quality, make us dream and once the video is over… We return to view the whole story or to return to the technical and fundamental points.

His interviews are always directed by the attention to the development of the actors, each director of golf can express himself on his golf, his team, his organization and appreciate the benevolence of Michel.

Golf wins on all planes with fantastic panoramas, multi-level technique, one or two pros accompany each episode and each has the role of explaining how to play a similar situation depending on whether one is pro player, amateur Confirmed or beginner. The mind plays an essential role, stress management is also addressed.

The success of a concept is certainly the idea and the development of this idea. In the situation of the birdie chain, the concept also lies in the endearing personality of his creator and his generosity. Generosity in effort, such a job cannot be done with a single click of a finger. Generosity in sharing, Michel is sharing, the pros who accompany him are not relegated to the background, they have a place of first role. But also generosity in the content of his show, no video below the 25/30 MN!

Now we’ll have to count with the birdie channel.

Some videos of birdie relayed by Golf Méditerranée:

Birdie 10 at the Taulane Golf Course

Birdie 7 at the Barbaroux Golf course 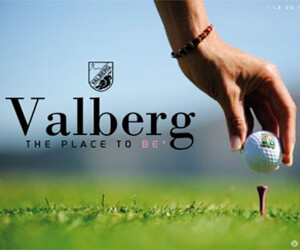