Michel TEICHET and his show birdie bring us back to an extraordinary place of golf in the Mediterranean: Le Domaine du Château de Taulane..
Its exceptional location at almost 1000 m altitude and less than 60 mn from the Mediterranean make it an unusual place in the world.

Michel TEICHET and his team of pros, François LAMARE of the PGA seniors and Alexis NOUDEU Head Pro of Taulane, deposit us on this legendary course signed by Gary PLAYER for new advice and some revisions (because nothing is definitively acquired!) for this 10 ° Birdie number at the Taulane golf course.

In this issue, you will notice a very interesting analysis of François Lamare on the action of the wrists at the drive which resumes the throw of the ricochet induced by Michel TEICHET to image the swing.

Then all three will return to approaches and exits of bunkers “a la carte”: 56 °? 58 ° or Iron 8? A solution for all levels of play: from the player more confirmed to the one who asks a little more security “not to destroy his card”.

Michel TEICHET also appealed to Serge NETZ for the interview with Arnaud Paul, General Manager of the premises.

The videos of Michel TEICHET are seen several times, several steps. The first viewing is a view of the whole discovery that puts you full eyes, the landscape, the actors, the councils,… Then we “rewind” the sequence to make its “market”: Revisit the course (we do not get tired of the images of this expanse of greenery and blue sky), return on the advice to the drive, on the approaches…
Over the course of the advice, we discover our weaknesses how to fight them and how to strengthen our qualities!

Among the ten numbers, you have a wide range of trips to undertake and full of tips to follow… 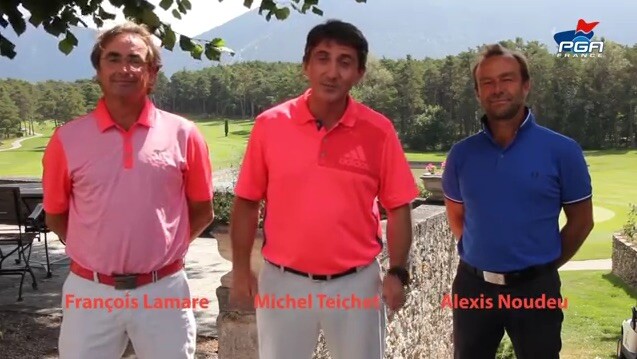